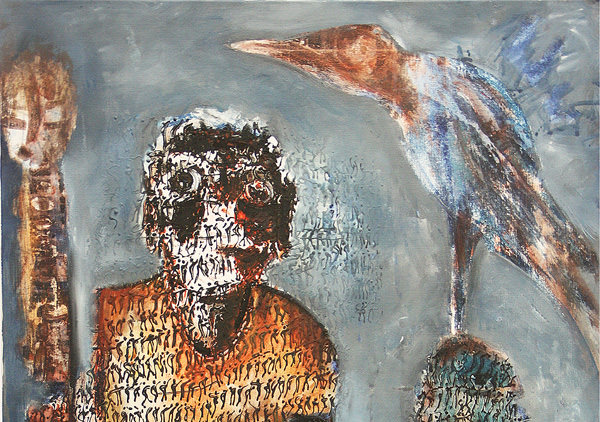 Joel Nankin: Born on 4 March 1955, Joël Nankin lives and works in Guadeloupe. Painter, musician, but also political activist, he has made his life a fight for creole identity. Passionate about percussion, he founded in 1979 the AKIYO group, a musical project and separatist movement. Later, campaigning for Guadeloupe independance, he is judged for committing attacks and threatening the French territory integrity, and is imprisoned from 1983 to 1989. Behind bars he discovered painting and has been influenced by the Haitian pictorial universe, Kandinsky and Mark Rothko. Nankin began working with pencil and soon moved on to colour. He uses mixed media, ink, acrylic, spray. His really efficient works are poems dedicated to people that suffer, denounce domination and injustice. Violent in the way of using colours, abrupt and scheming, it seems to be the reflection of his political commitment.